We are sweltering here at the moment and Dana Marie's sunflower post seemed so appropriate for our climate.

But, she lives in the USA where, I believe, it is rather COLD!  Maybe the sunflowers were a promise of things to come?

Anyway, I finished them on time for a change and got them up and posted.  All the time whilst painting them, I thought of that marvellous Sunflower/Pug lady, Nancy Medina whose favourite flower is the sunflower and who also loves dogs (especially Pugs).  Her sunflowers are a must-see if you haven't already. 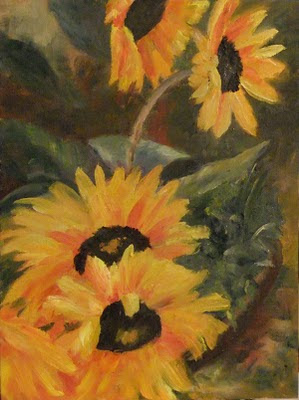 It is believed that when in the city of Cape Town, you absolutely cannot get lost.  That is, if you know the Mountain.

No matter where you go you can see some part of the Table Mountain chain, whether it's the 12 Apostles on the Atlantic Ocean side, the back of the mountain from the Southern Suburbs, or the well know 'front' of the flat topped edifice from the north.  So, if you find yourself in a strange part of the town, just look at the mountain and you'll know how to get home!

When looking at the front of the mountain, on the left hand side is the part known as Devil's Peak.  This is the part of the mountain that I see every day when I go into my garden.  But to get an unobstructed view, the best place to go is Oude Molen where our group has been painting for the past number of weeks.

I did just that and although it was blazing hot that day, managed to do a pretty fair rendition of the slopes of the Peak. 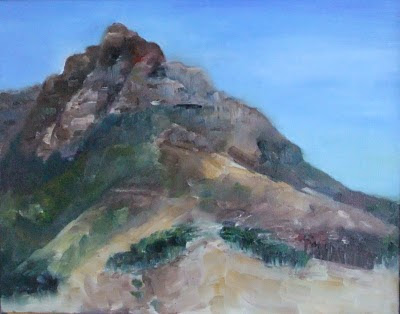 Devil's Peak was originally known as Windberg, and supposedly gets its current name from the folk-tale about a Dutch man called Jan van Hunks, a prodigious pipe smoker who lived at the foot of the mountain circa 1700. He was forced by his wife to leave the house whenever he smoked his pipe. One day, while smoking on the slopes of the peak, he met a mysterious stranger who also smoked. They each bragged of how much they smoked and so they fell into a pipe-smoking contest. The stranger turned out to be the Devil  and Van Hunks eventually won the contest, but not before the smoke that they had made had covered the mountain, forming the table cloth cloud.

James Parker's blog Windows to the Words was the inspiration for this painting.  He has posted a number of pics of 'look-a-like' kids and their pets, included a rather nice poem, and given us a month to do the painting.


Now, I'm always late with these challenges!  But I so loved this delightful couple, I had to finish it in a morning.  So I'm probably one of the first this time.

The dog presented quite a challenge at first.  Just one black mass but after figuring out that a couple of brush strokes in the right direction would give the impression of fur, a dab of colour where the nose and eyes should be and voila! a dog appeared.

Check out James' blog to see the other pics he's posted. 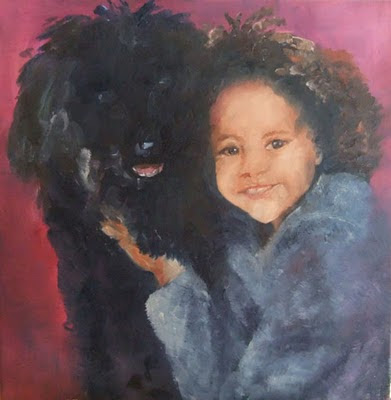 Now for something completely different.  As most of you know, I love two sports codes - cricket and rugby.  Last night I went to the cinema for the first time in about 3 years because I just had to see the movie Invictus on the big screen.  Directed by Clint Eastwood, it's about our past President Nelson Mandela and past Rugby Captain, Francois Pienaar.

We went along with a bit of trepidation because I've seen American productions depicting South Africans with the most awful accents, but Matt Damon with his Afrikaans accent and Morgan Freeman as Nelson Mandela were magnificent!  And so many memories of the games, of the flypast by the Boeing 747, of the game against the French where we thought the players were going to drown in Durban and the incredible New Zealander, Jonah Lomu!

If you haven't seen it already, go along to have a look-see and enjoy the wonderful photography of my home town of Cape Town. 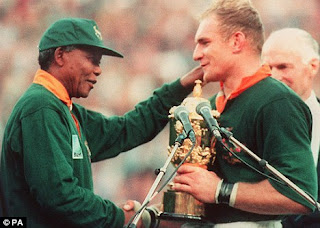 Our much loved past President Nelson Rolihlahla Mandela

A Road Runs Through

As I'm always late with challenge blogs, I looked to see if this pic was still up and yes! it was.  So I painted this in about 3 hours, waited until the next morning to get a fairly decent photo, went to post it, and lo and behold, a new challenge was in its place!

So I was late yet again!  But I put it on Dana Marie's blog anyway

Because of the time limit I gave myself, I really enjoyed slapping the paint on this without worrying too much about detail.  It was so incredibly freeing and I quite liked the end result.

A bit of a shine on the dark tree trunk (I did try to keep it thinner Dean!), and there is somewhere in America a national park called Sarah Helmick. 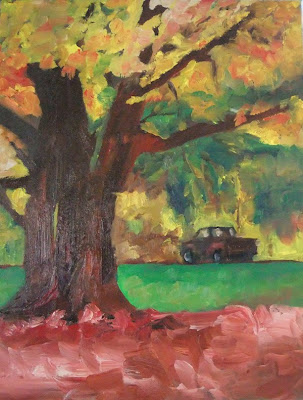 Over the New Year weekend, I was lucky enough to be invited up the West Coast to a town called Velddrif.

Velddrif is 60 kms before Piketberg, the town that Marie Theron paints and writes about - she is incredibly knowledgeable about this part of our country.

The West Coast (or Weskus in Afrikaans) is a rather harsh, windswept coastline, but has many beautiful parts to it.  Velddrif is situated on the coast at the mouth of the Berg River and although not the prettiest of towns, has many charming plein air places.  I stayed at a friend's holiday home on a small holding overlooking a tidal estuary of the Berg River and thank goodness for the wind.  It is so incredibly hot there that by the time 3o'clock comes round, you are totally knackered!  Anything for a swim!  Luckily there is all that lovely cool water around.

I only managed to do one painting early on New Year's day before the heat set in - this is from top of the bank overlooking the Berg River as it makes it's way towards the sea.

We are planning for our Friday painting group to go through maybe over Easter, so will bring you more of this part of the world then.  In the meantime, check out Marie's blog for more about the West Coast. 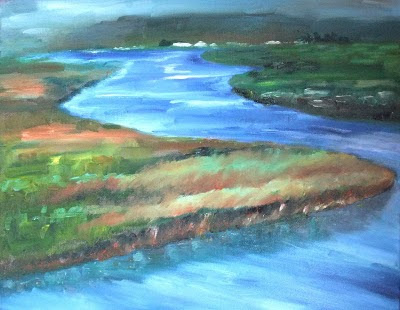