This week has been one of those weeks that we all occasionally have. I seem to have spent all my days running around, firstly with the exhibition we have on at the moment, secondly with trying to get my visa and passport in order so that I can leave next week and thirdly with all the shopping I've had to do - that was nice though, I love buying presents to take over. The shop assistants think you're nuts when you test the weight of each thing you buy! And on top of that, the weather has been energy draining hot!

I've started a few paintings in between all the chaos, but nothing is finished. I was looking at Jo Ann Elig's blog at a recent post when she did a copy of a well known American artist, William Merritt Chase's work. In class about two months ago, we were given a project to also do a Master, so I thought, in lieu of not having a really new painting to post, I would put this up.

It's a copy of a Berthe Morisot painting, Lady at her Toilette and I found it one of the most difficult things to do - copy another's work. In the end, you tend to put a bit of yourself into it and it shows if you go to the original. 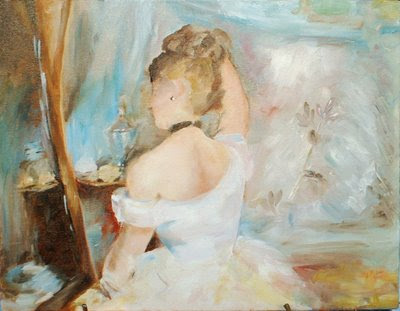 The Kruger National Park is one of the most wonderful, peaceful, tranquil places to visit. All you can do is drive around at 30 km (18 miles) per hour, looking for animals (usually the Big 5), go back to the camp at sunset and eat and sleep, to get up again at dawn and do the whole thing all over again.

It is many years since I was there, enjoying those incredible, warm, night time sounds of lions roaring softly, hyenas snuffling in the veld outside the camp and of course, the chirrup, chirrup of the crickets. Music to go to sleep by.

The beauty of the African bush is amazing as you can see from these pics taken by a friend of mine who goes there at least twice a year.

A baobab or upside down tree and Sunset over Sabie

While she was there she also took magnificent photos of a lion ambling across a bridge. He had all the time in the world as he knew that the traffic would stop for him - and he took full advantage. He is, after all, the King of the Jungle.

This is the painting I did of him as he got to the other side - the challenge in his eyes was unmistakable. Luckily there is a whole lot of motor car between the photographer and those teeth.

I must add here, that the likelihood of a lion attacking a human is very remote. But one never takes chances! 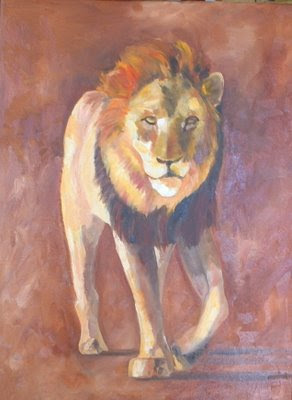 A month ago I posted a watercolour painting of Marius, the plumber who lives in Greyton. I wrote then that I would post the oil I was doing of him in "a few days". Well, those few days turned out to be more than 30, but here he is.

In this one I think I captured more of the kindness and gentleness that emanated from him. It all came from the eyes - and how I was tempted to fiddle to get them 'just that bit closer' to what I wanted to convey. I stopped myself doing that, and in retrospect, am quite pleased that I did. Any thoughts on that? 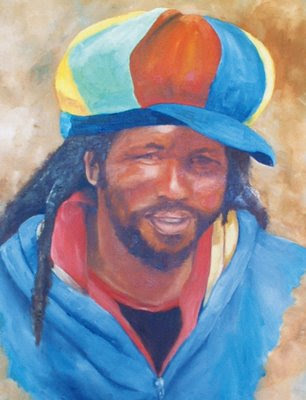 As anybody who knows me would know, I am an avid cricket fan. It sometimes gets so bad, that when we were playing against Australia (who are the World Champions) in Melbourne in this last test, I would set the alarm for 1am and spend the rest of the night watching cricket. Absolute madness I know. But it was worth it when we won and, even better, for the first time ever, South Africa won a test match series IN Australia. Unfortunately we are struggling a bit in the last test in Sydney, but tomorrow's the last day and anything can happen!

The absolute hero of the Melbourne test was a young Western Province cricketer, JP Duminy who got his debut century and went on to make 166. This portrait is of him batting during that century with Brad Haddin, the Aussie wicketkeeper behind the stumps. 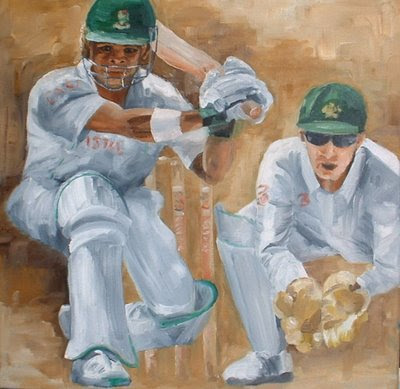 Now I know that cricket is a complicated game if you haven't been brought up with it. A while ago I sent an explanation of cricket to V ... Vaughn and thought that I would include it here as well. It's called the "Tea Towel Explanation of Cricket" - just for a laugh!

When a man goes out to go in, the men who are out try to get him out, and when he is out he goes in and the next man in goes out and goes in. There are two men called umpires who stay out all the time and they decide when the men who are in are out. When both sides have been in, including those who are not out, that is the end of the game.

I must start by wishing all my blogging friends a wonderful, prosperous and happy painting 2009.

Dianne McNaughton posed the question in her last blog - how do different people motivate themselves to paint! Well, all I know is when it gets this hot, I cannot do anything. And today is no exception. I know my blogging/cricketing friend in India, Sanjeev Joshi, would laugh, but honestly when the temperature hits 30 deg C (86 def F) I become useless. I go into my art room and just sit there looking at the canvas, listlessly put a few strokes down, and then have to find some cool spot. And the coolest spot in the house is where the computer is! I will make the effort later when it cools down but in the meantime I thought I would post this painting.

It is of the Dell at Kirstenbosch Botanical Gardens. It's such a lovely cool area in the gardens, starting from the pool shaped like a bird and appropriately called after the Colonel who designed and built it, Cnl Bird! flows over a small waterfall and onto the Dell where it forms a small pool before going under a stone footbridge.

We were 'plein air' painting that day, and I gave up and took a photo to do this picture, but the peace and tranquility of the area stayed with me. I hope I conveyed it. 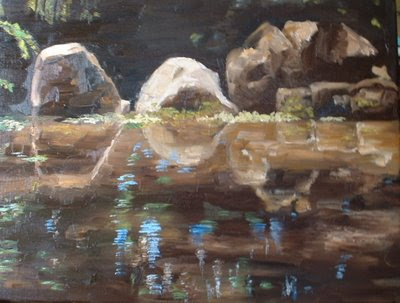