I think I'm coming to understand the subtleties of the snow here in Sweden. Yesterday in the morning, it was only -1 deg C and by midday, we were up to plus 2! As a result there was a lot of melting snow and slush. Waking up this morning there had been a light snow 'shower' and the areas that were snow free yesterday, have a dusting of white again. The apples that we threw into the back garden for the deer and the birds sank into the snow but were visible, now they too are covered with a sprinkle of white. The birds still find them though, clever things that they are!
I did this drawing of the shed (which in Summer is going to be the playhouse) in the garden. It is a typical small Swedish garden shed. When I did this, the snow had melted quite a bit and the roof was nearly its normal dark colour. I have subsequently taken photographs of it covered in snow again, and will try and depict those at a later stage. 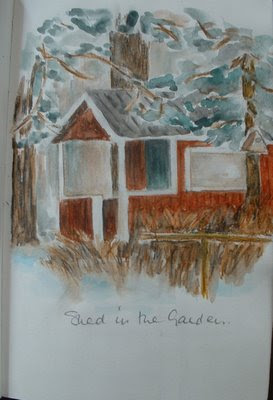 Sunday today, and my grandson is going to have his birthday party although his birthday is still 4 days away. He will be 7 on Thursday.

The plan was to have the party outside where they could play and have a fire to cook sausages for hotdogs. But this morning we awoke to more snow and where there was a little bit of thawing, the world is now black and white again. And the snowflakes are swirling down. So no snowball fights, no building of snowmen, just indoor games.

During last weekend we went down to Stockholm and visited, yes, wait for it

As a South African, Ikea is a whole new world to us. There are no stores quite like it. And quite frankly, it's a whole lot warmer in a building than it is outside.

We also took a drive through to Uppsala, the university town which was founded in 1477.(the University, that is). The Swedish Institute of Space Physics is also there as is the Astronomical Observatory. All very high tech! It was also the main pagan centre in Sweden. I took some photos on the way there and from the blurry images and my memory, came up with this drawing. 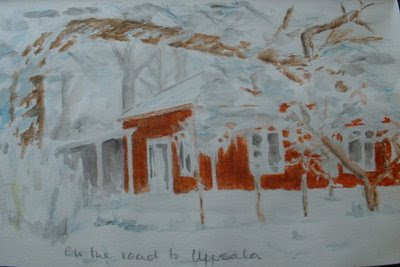 I'm finally getting used to the colder weather and quite enjoying going for those bracing walks in the fields of snow. I never knew snow could be so noisy.. crunch, crunch, crunch as you walk - as a result haven't seen any deer or badgers yet.

Some time ago, I painted this picture of a timber wolf and gave it to my son. I had forgotten about it until I saw it on the wall of his office. I specially painted it for him as he loves wolves - most of us have a closeness to some type of animal - mine is dogs and his is wolves. 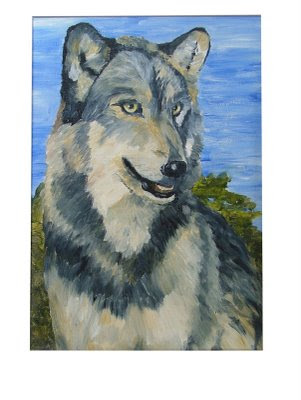 And to that, another little (sad) story. The wolf population last century was decimated in Sweden. Only a tiny area in the very north of this cold country was left. With the conservation policies in place, this population is slowly increasing and as a result, there are more sightings of wolves up north.

However, one lone wolf came down too far south and was roaming the countryside south of Stockholm. Unfortunately it was living off the fat of the farmers lands and taking out the occasional sheep. The farmers weren't charmed and shot the animal. A huge outcry by the bunny huggers (I am an unashamed bunny hugger!), but in the end, the Nordic shrug of the shoulders - that's life.

An Introduction to the Snow

I'd forgotton how cold cold could be until I got here - and it was only minus 2° C! Thank goodness for central heating. It is warming up a bit - now 0° C and it was nice to get out this morning. It takes about 20 minutes to get dressed for the outside, something I'm not used to. Hat, gloves, two coats and boots but when we were ready, we ventured into the forest area at the back of the house.

The sunshine (what there is of it) really makes a pretty picture of the snow.

It was a little gloomier this morning in the forest at the back of the house. But we had fun throwing snowballs at each other!

A little story - apparently some hunters were firing their guns (I absolutely hate the thought of hunting beautiful wild animals, but there you go), and in the process they woke up a bear. This caused a bit of concern as a hungry bear in the middle of winter is not the best creature to have wandering around the forests. The hope is that it found something to eat and has gone back to sleep. It was woken up not too far from here!

No painting thus far, only photographs. Will get there a little later.

A few weeks ago my sister did some housesitting for a family who lives in Steenberg. Diana (my sister) is a dog trainer and she gets these requests from people who mainly need to have their animals looked after. This particular family have just become parents to the most delightful little (monsters!) Pugs called Stig and Yoshi.

Their curiosity knows no bounds and when Diana brought them over for a visit on the way back from wherever they'd been, they had the cheek to bark at our Rottweilers! Jesse and Katie (the Rotties) couldn't believe their eyes - just as well there was a security gate between them!

Yesterday I had a visit from a Pug lover, Nancy and the Fatties (check it out - she is involved in Pug rehabilitation) and just for that I thought I would post the painting I did of Stig and Yoshi (Stig in orange, Yoshi in blue) - I'm starting to use bigger brushstrokes and layering paint and because I met these two, I so enjoyed this painting. Hope you do, too. 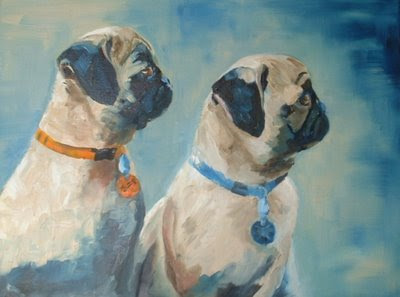